I write fiction, poetry, and essays. I write what I like.

I don’t write “realistic fiction” or “literary fiction”. Much of my fiction has been fanfiction, transformations of existing works. My original fiction, too, is transformative, a mix of fantasy, science fiction, myth, fairy tale, romance, and erotica. I do write sexually explicit fiction and not exclusively about male/female couples.

I write poetry about gods, goddesses, myths, magic, religous holy days, and my relationships with those things far more often than I write poetry about my family history or my landscape. My favorite poets include John Donne, George Herbert, Dante, T.S. Eliot, Marge Piercy, and Gary Snyder.

I prefer to review or discuss things I enjoyed rather than things I hated. I’d rather review a book I liked and hope other readers will enjoy than deconstruct a bad book word for word. I’d rather analyze the lyrics of my favorite singer-songwriter, Hozier, or share a video of a musical performance I liked than tell you why this So-and-so is Problematic and you shouldn’t like them.

I am basically a socialist politically and the current state of American politics fills me with incoherent rage–so I don’t write about it. I leave that to people who are better informed than I, who can be cogent and coherent about the failing state of our democracy. On the other hand, I am a political, sexual, religious, and gender minority, so I don’t believe in Art that isn’t political. Star Trek was and is political. Science fiction is political. Romance is political. Everything is political.

I also like birds, very, very much. My cockatiel has been my faithful companion for almost twenty years, and I hope he’ll be around for another decade or so. So you might see bird pictures and read bird stories here, too, along with writing about books, music, film, television, religion, spirituality, magic, gender, sexuality, and all the other things that make life interesting.

Last night I was on my way home, walking from the light rail station by way of the Rite Aid where I had picked up a few things. I was dragging at that point in the evening, moaning to myself that I was too old for this, I couldn’t routinely stop on my way home for stuff any more, I wasn’t even sure I had enough gas in my tank to get home–and then I saw a bird.

I immediately stopped to take a closer look. He was lurking around the entrance to the Belvedere; he came out from under a car and hop-fluttered to hide behind one of the large flower pots. He was a raptor–specifically, I guessed, a kestrel. A very small bird of prey, but still, a bird of prey, with a very sharp beak and tiny talons.

I talked to him for a minute and he seemed basically okay; however, he seemed to be dragging his left wing. I didn’t see any wound, but it was obvious that he couldn’t take flight, or he would have done so already. I became alarmed when he fluttered up into the revolving door of the hotel. Worried that the door moving would smash him, I held people off for a few minutes while I tried to coax or pry him out. He gripped the pavement and gave me a threatening open beak when I attempted to poke him gently with my cane. A passing dude offered me a folder as a scoop, and tiny raptor flapped away to hide under a double-parked bus when he was lifted on the stiff folder.

When the bus pulled away, tiny raptor was unhurt but exposed. He promptly headed for the building entrance again and got up into a corner beside the doors. I sat down on the steps next to him and snapped a few pictures, hoping to post on Facebook about him; I was picking up the wifi of the clinic across the street. Then he escaped me again, got into the revolving doors, and was swept into the lobby of the hotel.

At that point I got up and went after him. I had a small towel that a guy who works in the hotel had given me, a heavy-duty disposable thing like a big paper towel. When tiny raptor retreated into a corner by a closed door, I accepted that it was up to me to help birb. So I threw the towel over him, dropped my cane and bag, and picked him up.

Once I had the towel around him, he was entirely still, and small enough for me to grasp in one hand. I went to the young woman on duty in the lobby and asked if she could look up and call a bird rescue. Her appeal to the older man at the concierge desk did no good; he shrugged and suggested taking the bird to the park and letting it go. So I wrapped my little friend carefully in the towel, put him in my shopping bag, and took him home.

Once in my apartment, I grabbed an empty box from my unpacking and took him directly into the bathroom. Closing the door, I placed him gently in the box and then folded the flaps over him. He was alive and awake and calm, didn’t seem likely to come flapping out of the box like a bird out of hell, so I turned out the bathroom light and left him there. I knew a small dark space would keep him calm because I had dealt with another stray juvenile bird back in the fall and asked for advice then.

I got on Facebook and consulted my local birding group, who gave me the number of a bird rehabilitator. She cheerfully agreed to come pick up my little foundling that evening, so in half an hour tiny raptor was on his way to being properly cared for. And then I changed clothes and ate dinner.

I learned from this experience that I know far more about birds than the average person walking down the street, which I guess shouldn’t surprise me. Most passersby didn’t even *notice* the bird, or didn’t identify it as a species that is not usually roaming city streets. When I showed up holding the bird in a towel, the young woman who’d been sort of helping said, “How did you do that?” I think I said, “I have a bird of my own, I’ve done this before.” But really, I just did it. Throw a towel, scoop up bird. I had respect for his beak and claws, but I wasn’t afraid of him. And he seemed to know that I was a crazy bird lady who would do anything possible to help him, including taking him back to my home while carrying a knapsack and a shopping bag and walking with a cane.

This morning my Facebook notifications are full of praise from my birding group for helping tiny raptor, and I feel very blushy. On the other hand, I also feel… kind of heroic and empowered? I did something most people wouldn’t even attempt, and it was No Big Deal for me. Because I am Crazy Bird Lady! *strikes superhero pose with fists on hips*

Here’s a bad picture I took of tiny raptor while sitting on the hotel steps about three feet from him:

And here’s a better picture of another of his kind:

I began to notice birds back around 1992, when my then-husband and I brought a pair of tiny exotic finches into our home. We named them Hildegard and Alexander. Two years later, we added zebra finches whom we called Papageno and Rosamund to our flock. I used to refer to them as the home entertainment center because watching their interactions was better than TV.

I began to notice outside birds, and of course, I still do. That pair of finches inaugurated a life-long love affair with our avian friends. Wherever I go, I’m attuned to the presence of birds. Even seeing some house sparrows brightens my day. I was thrilled the other day when I spotted a pair of goldfinches feeding on what I think were echinacea flowers outside a 7-11.

The Romans also noticed birds. The word “auspices” comes from Latin and is a contraction of “avis” and “specere”, literally, to look at birds. They divined by laying out a sacred space and watching the sky for the movement of particular birds. They also consulted sacred chickens (never insult the sacred chickens, it’s bad luck).

Taking the auspices relies mainly on watching for unusual patterns of bird activity. But I look at the normal bird activity in my East Coast U.S. city and think about the gods who are patrons of the birds I see. 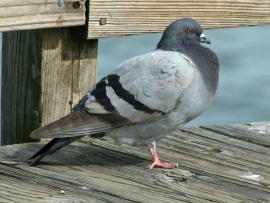 Take pigeons, for example. Pigeons have a bad rep, but they are technically feral rock doves. Their ancestors were domesticated for thousands of years, for their meat and for their companionship. Doves belong to Venus and Aphrodite, so that includes the humble urban pigeon and the fancier mourning dove, one of my favorite birds with its soft subtle colors and hollow crooning call.

I think songbirds, too, belong to Venus, though that’s my own headcanon (or UPG, if you prefer). That includes the invasive house sparrows and starlings and the native sparrows and goldfinches who populate the city, and the juncos who winter here. I’d assign her the cardinal, too, who pair-bonds as devotedly as the dove.

We also have a lot of Canada geese who used to winter here and then just never went home. (I’ve started calling them Chesapeake geese.) Geese belong to Juno and were kept at her temple in Rome, where they warned the citizens of a Gaulish invasion. Juno was given the title “Moneta”, the warner or admonisher, in gratitude; because coins were struck at the temple, currency acquired the name “money”.

Crows and ravens belong to Apollo. I don’t see ravens in my urban neighborhood, but there are lots of crows. I have a probably bad habit of cawing back at them when I hear their slightly nasal “awk, awk” coming from overhead.

The eagle belongs to Jupiter. I have actually seen bald eagles near my workplace, because it lies close to the Middle Branch of the Patapsco River. I once watched in astonishment as a mockingbird attacked a bald eagle, swooping and even ramming the much larger bird, which simply sat there atop the power lines with a long-suffering air. I would tend to associate other raptors with Jupiter, too. We have a peregrine falcon nest atop one of our skyscrapers that has been in use for decades, and I’ve seen smaller hawks, too.

You might be surprised to know that a bird I see frequently and all over the city is the Northern mockingbird. This is entirely my headcanon, but I can’t help thinking a bird whose scientific name is Mimus polyglottis, and who can imitate everything from another species of bird to those obnoxious car alarms that go through half a dozen noises, has to belong to Mercury. They are clever and also fearless, whether of humans or of other birds; threaten a mocker’s territory at your own risk.

As trees belong to Silvanus, flowers to Flora, the seasons to Vertumnus, so the birds belong to different gods and embody their presence. And I wonder what gods or spirits or numina (to borrow a very useful Roman word) watch over the companion birds in our lives? The highly popular cockatiel, budgerigar, and zebra finch all hail originally from Australia; other popular birds come from Africa and South America. I am grateful to those unknown numina for the birds who have shared my home.